Some of the commonly used household chemicals for PCB Etching

Some of the possible weak Acids & Chemicals In 2018 Victor Levy at Fab Lab ULB used laser printing and heat transfer of the mask then Chemical bath and laser cutting for the outline. here 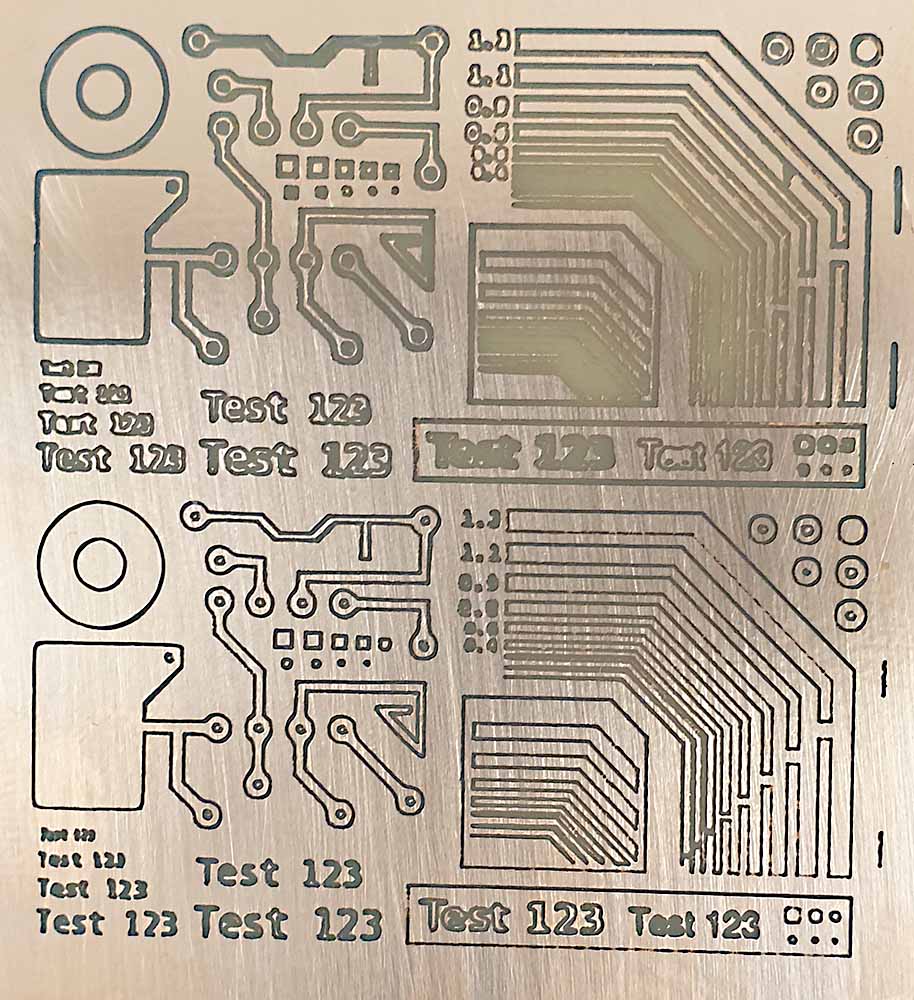 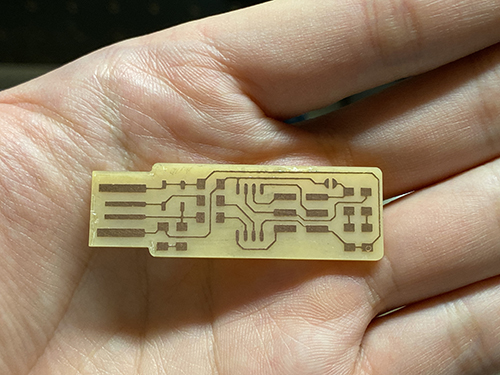 Don’t get complacent with safety because you are “only using a small amount of a chemical on a small test area!”.

Depending on the availability of components, hams use one of the solutions shown in the table below. Etching solutions are arranged in order of popularity of their use by ham radio at home.

For each cm² (square centimeter) of 1-oz copper PCB to etch, mix:

Start to finish, etching takes 20 minutes for small boards, or up to an hour for large ones.

Dilution of a solution

The reactant is the result of the combination of acetic acid (which represents 80 grams per liter of white vinegar according to the bottle [which says 8° acidity]) and hydrogen peroxide (which is at 3% mass concentration).

We can calculate the optimal ratio of each component in order to get a maximum amount of it.

Now you may be asking yourself “Why do we want to add salt to that ?”.

Well, one possible explanation (I'm not actually sure it is the right one) is that the reaction brings neutral Cu atoms of the board to Cu2+ ions in solution that would form copper acetate (it is the combination of one Cu2+ ion and two CH3COO- "acetate" ions). And, at one point the bath would reach an equilibrium (because there is as much Cu2+ forming from Cu than Cu2+ getting back at a solid Cu form).

Generally this happens before your board gets its beautiful tracks, which is quite sad. Table salt, or NaCl, brings chloride ions Cl- to which Cu2+ ions will bond to form cupric chloride or CuCl2 instead of being left in solution (those ions would endlessly come back and forth from Cu to Cu2+). You can see this during the reaction (if you leave the reaction with no salt it will turn blue which is the color of copper acetate and stop, whereas if you put salt it will turn green, the color of cupric chloride, and carry on).

By doing so, the equilibrium point is pushed forward and more copper can be dissolved, so that, if you are generous on salt (if you introduce table salt in excess) you may get your PCB in the end ! One tablespoon of salt on the board is generally sufficient.

Hypothesis : Given the concentrations of hydrogen peroxide and acetic acid in our "recipe" ferric chloride should be way more efficient. However the Salt/Vinegar/Hydrogen peroxide seems to be both less expensive and safer.

Hydrogen peroxide is what we call an oxidizing agent (a mild one), meaning that it easily accepts electrons from other species to form H2O (hydrogen peroxide itself is electron deficient). What happens when it “dissolves” copper metal is that a neutral copper metal atom releases two electrons, to form a Cu2+ ion in solution. All metals tend to release electrons to form positively charged species….we refer to anything that DONATES electrons as a reducing agents. The strength of metals as reducing agents varies and copper is a fairly weak reducing agent. I did a demonstration in my general chemistry class recently where I dissolved a piece of copper metal in concentrated nitric acid….again copper loses electrons to form Cu2+ and H+ ions from the acid gain electrons to produce hydrogen gas. If you see a bluish color to your solution after the copper is dissolved, it is due to the presence of the Cu2+ ions.

The other components HC2H3O2 is acetic acid, and yes it gives the characteristic taste and smell to vinegar. It is a relatively weak acid, but aids the oxidation-reduction reaction between the copper and the hydrogen peroxide by providing a source of H+ ions to solution that are used to form two H2O molecules from one H2O2.

Hydrogen Peroxide oxidizes the copper, and by supplying the required proton the acetic acid goes on to form copper acetate. The salt appears to be a catalyst, where it forms an intermediate dark green/black copper chloride on the surface, which is then converted to copper acetate with mixing. Perhaps it helps stabilize newly formed copper ions. I can’t quite tell, but certainly a much smaller than stoichiometric amount is only needed to speed up the reaction.

This is a harmless side reaction where the peroxide is decomposing to water and oxygen gas. Obviously don’t keep too close as the effervescence will sputter the etching solution up, which at this point will be acidic, oxidizing, and contain some amount of copper chlorides.

Since H2O2 is a mild oxidizing agent (and can sometimes be a reducing agent if combined with a very strong oxidizing agent), it should only be dangerous to other weak or strong reducing agents. It may do this much more slowly depending on the metal. I wouldn’t leave it in contact with aluminum, nickel, or other common metals for long periods of time. 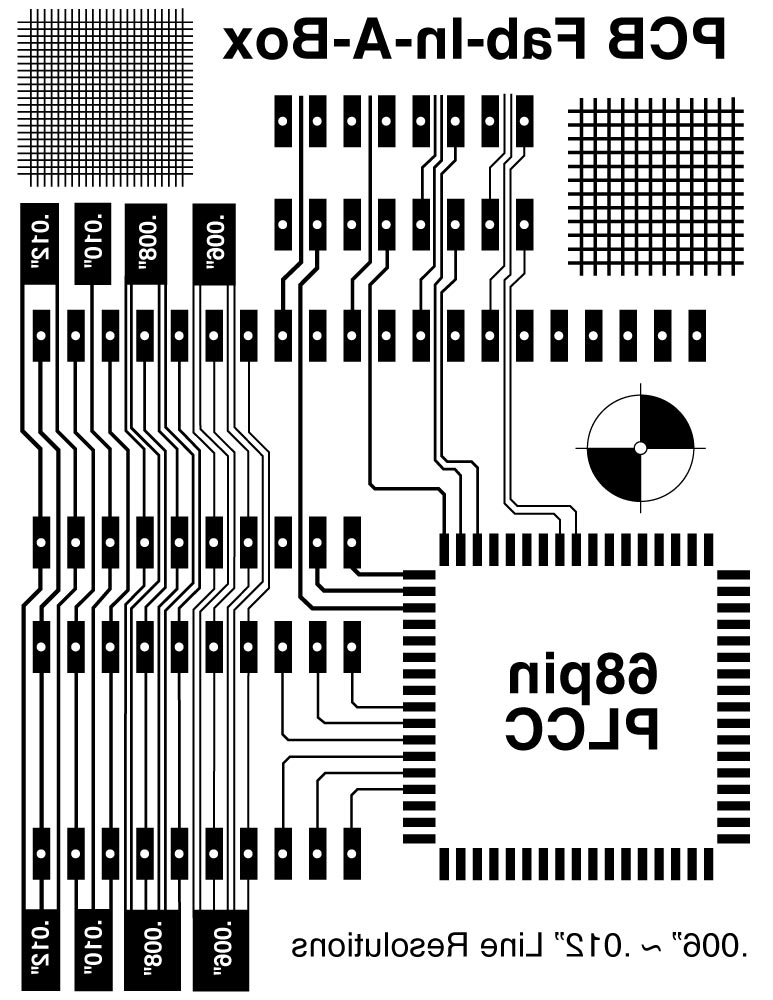 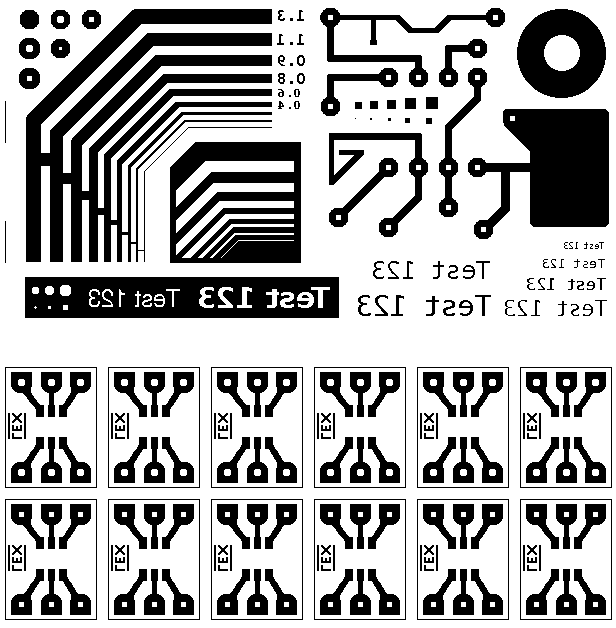 You can Design your own on a Circuit Design Software (Eagle)

Once all the unmasked copper has been etched away, take out and rinse off the board with running water. The remaining blue solution will contain dissolved copper salts which are not environmentally friendly and very toxic to plant and aquatic life.

Reusing the etching solution is not favored because it results in slower and more messier process. Using fresh mix every time is preferable.

Disposing of the etchant.

Dispose of the spent pickling solution into the sewer?! There are a lot of opinions on this, and people are very, shall we say, passionate about it. In my opinion, you can either throw it in the trash or pour it down the drain. Putting it in a container and dumping it in the trash also seems fine.

Neutralizing the acid & precipitating the Copper

Adding sodium bicarbonate (baking soda) in small amounts at a time; the solution will fizz and release carbon dioxide gas.

This will neutralize the citric acid, and precipitate out the copper in the form of copper carbonates.

The solution is sufficiently neutralized when no more fizzing occurs on bicarbonate addition.

At this point the liquid can be safely disposed of (down the drain in small amounts), and the left over precipitant can be disposed of as solid waste (in the garbage.)